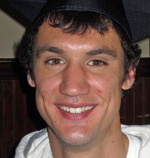 The Associated Press ran a detailed feature on gays in sports, with the focus on Eastern Michigan runner Austin Hendrix. I had spoken to the writer, Nancy Armour, and she had found Austin's terrific coming out story on Outsports that ran in December. His journey was used in the AP story to illustrate the struggles faced by gay athletes and it was great that it ran on websites nationwide, including Austin's hometown paper in Ohio.

Runner's World, on its Facebook page, ran a link to Austin's story and it sparked a debate that has been so common on mainstream websites when dealing with gay issues, and one we sometimes overlook since it seldom occurs on gay-themed sites. Most of the comments supported Runner's World linking to the story, but there were a fair number of naysayers who, as always, missed the point.

Then there were the voices of reason:

To the people who wonder why this is a story: It will cease being a story when all LGBT athletes are free to be themselves openly with fear of ridicule, banishment or violence. The fact that almost no one is out in any sport makes those who are out newsworthy by their very existence. The media get that, even if many people, through ignorance or hate, don't.

Also, straight athletes broadcast their sexual orientation any time they mention a wife, husband, boyfriend or girlfriend, which is common in any media profile. The day that a gay male athlete can casually mention his boyfriend or husband without it being the focus of the story is the day we know equality has been won.

Runner's World, to its credit, stood by its decision to highlight Austin's story and never backed down despite the criticism. Austin used the Runner's World debate to reaffirm why he told his story, writing on his Facebook page: