7 shirtless jocks on cover of Dutch magazine on gays in sport, and 2 come out as gay

Share All sharing options for: 7 shirtless jocks on cover of Dutch magazine on gays in sport, and 2 come out as gay 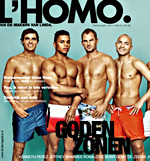 L'HOMO, a special edition of the Dutch women's magazine Linda, features seven shirtless athletes on its cover in an issue dealing with gays in sports. The catch is that only two of the athletes are gay, with the rest showing their support for the subject. The athletes show a lot of skin in the magazine and in backstage videos.

For gymnast Jeffrey Wammes, the special edition was a perfect opportunity to come out. “There was already a lot of speculation about whether or not I fell for boys or girls.

"To me it has nothing to do with sport or how I perform. But when I was asked to do this, I made it clear straight away how things were and that’s that.”

Verschuur told about how coming out has helped him in his sport:

“Many fellow drivers – not mentioning any names – told me they were gay too. But they dare not say so in public which is a real pity. Because there is nothing to fear. On the contrary, it has only made me stronger. It’s made me a better driver.”

The editor the magazine Linda de Mol came up with this slogan for the special issue: "Even more gold after coming out."