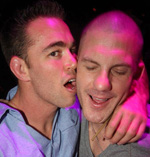 Jake Shields is fighting Georges St. Pierre on Saturday for St. Pierre's UFC welterweight title. This prompted my friend DJ to send me a note saying mixed martial arts fans are always questioning the sexual orientation of both fighters. DJ is right.

Start typing in "Jake Shields" into Google and the second recommendation is "Jake Shields gay." "Georges St. Pierre gay" yields several pages of search results. The humorous part of this is how flimsy the "evidence" is and that it says a lot about stereotypes.

Jake Shields is gay, apparently, since photos surfaced of him looking like he and a dude were giving each other tongue baths. That's it. Some photos in a club. As for St. Pierre, his gayness comes from having a French Canadian accent and being hot and into fashion. Under that criteria, a lot of guys in Montreal are gay.

These rumor threads are fairly common on many MMA sites, but what I find heartening is how they mostly elicit a shrug or some funny comments, nothing really homophobic. One guy said he was straight but that he would "go gay for GSP." And the majority of people say they really don't care.

Stereotypes by their nature have some truth to them, and mixed martial arts by its nature lends itself to certain assumptions. As DJ wrote about the sport's homoerotic appeal: "Where else could you get another man's crotch shoved in your face all the while entertaining millions?" Not that there's anything wrong with that.