Share All sharing options for: Gareth Thomas attends the wedding of Prince William and Kate Middleton 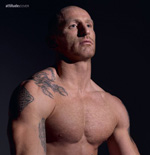 April 29 update: The royal wedding is today and Gareth Thomas is on the guest list. He knows Prince William from William's role as vice patron of the Welsh Rugby Union. William's name is also on a trophy for an annual match between Wales and South Africa.

I was watching the "Today" show here in L.A. before bed and just saw Thomas enter Westminster Abbey to take his seat for the wedding. It was cool to see someone there I've actually met.

Original item from February: Openly gay rugby player Gareth Thomas from Wales has tweeted that he has an invite to the royal wedding of Prince William and Kate Middleton.

Need to buy a new hat? oops did i say that out loud. Yes I have had an invite to the royal wedding. have you?

Uh, no, our invite must have been lost in the mail. Fellow rugger Mark Bryant then challenged Thomas, tweeting: "Bullshit??!!" Replied Thomas: "No bullshit girlfriend..Will bring the proof tom." To which Bryant retorted: "Sweet, I'll be your date then!! Hahaha." Guess some guys will go gay for royalty.

The Queen sent out 1,900 invitations to the April 29 to the likes of David Beckham, Elton John and various monarchs, but not President or Mrs. Obama. As the London Telegraph reports: "As the Prince is not yet heir to the throne, the wedding is not classed as a state occasion and protocol dictates that elected foreign leaders should not expect an invitation.

It is amazing how much Thomas' life has changed in the 14 months since he came out. An invite to the royal wedding may be the topper. So much for the myth that it's impossible for an openly gay pro male athlete to come out without facing nothing but dire consequences.