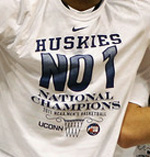 Connecticut beat Butler, 53-41, in an NCAA tournament final that set men's college basketball back 60 years. It figures that a game pitting the Bulldogs against the Huskies turned out to be a dog.

The 53 points by Connecticut was the fewest for a champion since 1949, while Butler's 41 was the lowest since 1950, way before there was a shot clock. The Bulldogs' 18.8 field goal percentage was the worst ever in a title game.

Overall, this was an exciting NCAA tournament but the final stunk. There was some good defense but there were numerous uncontested shots missed. Butler stars Matt Howard and Shelvin Mack scored a combined 20 points and Howard was 1 for 14 shooting. UConn's Kemba Walker was only 5 for 21 shooting, and he was saved for post-game scrutiny simply because his team won and Butler was so bad.

The game was so pathetic that the highlight was Charles Barkley's halftime comment where he basically said all women were gold-diggers. UConn has now won its third NCAA title since 1999, but outside of Storrs, no one will remember this final except for how crappy it was.