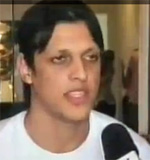 About 3,000 fans at a pro volleyball match in Brazil taunted one player repeatedly with chants of "bicha," which in Brazilian Portuguese is roughly the equivalent of "faggot" (see video below). The player, Michael (Brazilians refer to their athletes by their first name or nickname), came out publicly after the match as gay and said he was shaken by the incident.

The website Volleywood has a complete rundown of the incident, translated from Portuguese, of the game between Michael's team, Volei Futuro, and Sada Cruzeiro.

This incident has prompted Michael to admit to the media that he’s gay. "I’m gay. Everyone knows who I am. My team fully respects my sexuality. I have been playing for 10 years and everyone has treated me well and fair. I do not feel the need to let everyone know about my sexuality,” says Michael.

Michael's coach has rallied around him and Brazilian volleyball officials are investigating the incident, which occurred April 1 at Sada Cruzeiro's arena. Michael decided to ignore the taunts and headed straight to the locker room after the match, with his teammates making sure he was OK.

Mariana Lajolo, who cover Olympic sports for Folha de S. Paulo, the leading Brazilian newspaper, told Outsports that what really bothered Michael was that the chants were done by men, women and children of all ages and not just an isolated few. She said the incident is receiving huge play in Brazil, with the vast majority of people appalled at the actions of the fans. It has also opened a debate on gays in sports; in Brazil, there are many athletes known or suspected to be gay, but almost no one publicly out.

The two teams meet again Saturday in the second game of their league playoffs on Volei Futuro's home court, and then April 15 at Sada Cruzeiro if Volei Futro wins tomorrow.

Here is video where you can clearly hear the fans chanting "bicha" when Michael is serving: