Here's a story to warm the heart: Craig Cassey, an openly gay high school track athlete in Pennsylvania, was crowned his high school's prom king this weekend. He then had his own special prom moment with his boyfriend. I have written several times about Craig and his awesome blog, Craig's Gay Word and he continues to impress.

Craig had a dilemma -- he wanted to go to the prom with his boyfriend, Carl, but that risked upsetting his mother. Craig, being mature and level-headed, figured out that "even if you can’t take your partner to prom, there are many ways to save your gay prom experience." First, Craig recounts being named king:

I was crowned prom king – a moment meaningful in many ways, mostly for what it symbolizes: acceptance. Winning prom king amongst a crew of 7 potential male candidates shows that my school is not only tolerant of openly gay students but is accepting! My good friend Molly won with me and we slow danced to cheers from all sides, congratulating us and urging us to kiss. Don’t worry, we didn’t. There were no shouts of “Homo,” no negative remarks, just congratulations and “bro hugs” and pats on the back – truly a testament to my school’s consistently improving climate.

The coolest part happened the next night when Carl showed up at Craig's and they had their own special moment: 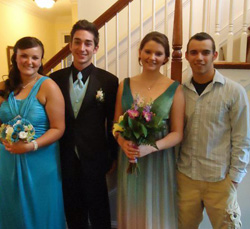 Craig, left, and Carl right in a pre-prom photo.

I walked out with netbook, king’s crown, and scepter in toe and shut my front door for some privacy. Having saved Areosmith’s “I don’t wanna miss a thing” on youtube previously, I slyly clicked the play button and set the netbook aside in a manner which seemed more smooth in my head than in reality. Nevertheless, Carl took my hand with smile broadening and after I crowned him, we pulled each other close and danced.

His eyes began shimmering after the first few sways as tears of joy gently glided down his face and I held him closer, enjoying the moment. For 4 minutes we soaked in the experience, surrounded by no lights, no students, no dresses or tuxes, but a red wicker chair, some southern home decor, and a basket filled with Gatorade… while it was not the prom we had hoped for, it was the prom we had and somehow – I find myself unable to imagine anything better.

How awesome is that? The whole post is well worth a read as is his entire blog. Craig is going to Georgetown this fall, where he will run track and continue to blog.