Share All sharing options for: Charles Barkley says all that would matter is whether a gay athlete can play 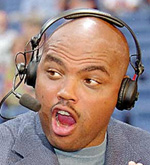 Leave it to the unique Charles Barkley to distill the gays in sports debate to its essence: The only thing that matters is whether a guy can play or not. From Michael Hiestand at USA Today:

Barkley, on SiriusXM Radio, was asked about New York Ranger Sean Avery supporting same-sex marriage and whether openly gays athletes would be accepted in pro sports.

Barkley replied how gay athletes would only be judged by "whether he can play or not. If somebody is gay, that's their own business. But it bothers me how people try to say that jocks are not going to like a gay. ... I think gay people should be allowed to get married and God bless them, that's their own business. Listen, if a guy can't play that's the only time we don't want to play with him. We don't care about all that extracurricular stuff."

That's really what it should be about and my guess is that how it would go in pro sports, once the initial hubbub died down. Pro sports is a bottom line business and that is winning, and in the end the only criteria a team should use is whether a particular player will help his team win or not. The rest should be superfluous. But until someone has the guts to publicly be who they are, we have to depend on the Barkleys and Averys of the world to take a stand.