Rugby player Ben Cohen in U.S. to drum up support for gays in sports

Share All sharing options for: Rugby player Ben Cohen in U.S. to drum up support for gays in sports 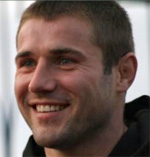 We've written about the very gay-friendly rugby player Ben Cohen for years, and now that his career is over, it's great to see him devote his energies into making sports a safe haven for gays and lesbians. He is now touring the U.S., visiting four cities that have gay-oriented rugby teams.

Our friend John Branch at the New York Times profiled Cohen along with another straight ally, wrestler Hudson Taylor, and Cohen told about how moved he has been by the response to his initiative.

With the surge in the use of social media in recent years, Cohen — whose Facebook page has been “liked” by more than 150,000 people — began hearing more and more personal accounts from fans who have felt ostracized for being gay. Some said they quit sports because of the harassment, or had been shamed into staying closeted, unable to find support from friends, family and teammates.

“It brings me to bloody tears,” he said, as he read a few e-mails aloud. He wore a T-shirt that read, “I stand up with Ben Cohen,” and included his silhouette as a logo.

The event in Seattle on May 27 is a town hall format on the University of Washington campus that will also feature Dave Kopay, the former NFL player and gay rights pioneer. The organizers say that they have reservations from a number of college and high school athletes and coaches, just the demographic that needs to hear Cohen's message.

Cohen has officially retired from pro rugby in England after his team cleaned house, with 21 players exiting. It's exciting to see him embark on the next journey in his life.