Share All sharing options for: Gay San Francisco Giants fan convinces team to film an "It Gets Better" video 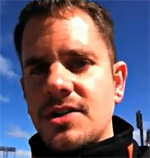 Hats off to Sean Chapin, an openly gay man and fan of the San Francisco Giants, who convinced the World Series champs to film a video for the "It Gets Better" project. The team responded to Chapin's video (view below) and a petition by Change.org signed by 6,500 people and announced the move. From the San Francisco Weekly:

According to Staci Slaughter, spokeswoman for the Giants, the team was already considering creating a video even before the change.org petition circulated last week, which requested that the Giants be the first sports team to join the campaign. More than 6,500 people have signed the petition. The It Gets Better Project started in 2010 after a slew of LGBT suicides across the nation. Since then, thousands of ordinary people, celebrities, and politicians have made videos. Details of the video are still being worked out so I can't provide you with specifics," Slaughter told SF Weekly in an e-mail today. "But we are confirmed to produce and post a video."

Chapin, who has played with San Francisco's gay rugby and ice hockey teams, outlined his reasons in a letter to the team.

I believe that now more than ever is an opportune time for someone or some team in the male American professional sports world to take an historic, proactive approach in connecting to the LGBT community. ... I can’t imagine a better, more accepting and culturally diverse city for something like this to happen than in San Francisco. Though it would be a dream to see a major league baseball player come out and show the world who we are, and for the player’s team and city to rally behind him in solidarity and transform their baseball stadium accordingly, there is something that the San Francisco Giants can do right now that I know in my heart would be supported by its city with open arms. ...

I believe that the San Francisco Giants are in an optimal position to take a lead role for Major League Baseball and American sports in general and could possibly make the most definitive It Gets Better video that we have seen yet. The San Francisco Giants are recent World Champions, are comprised of many different players who come together and form a whole far bigger than their sum, and are from a city that wholeheartedly celebrates our diversity and differences. Should the team make a video, I believe that the Giants would catalyze a historical and watershed moment in professional sports and forever be revered as true Giants in humanity.

The Giants plan to produce the video soon and would be the first pro team to do an It Gets Better video. I know of a college soccer team that is also doing one and will be released soon.

Chapin's video to the Giants:

Hat tip to the Advocate.