The gayest sports month ever

Share All sharing options for: The gayest sports month ever 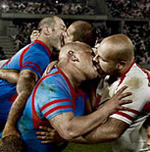 The past month has been amazing in terms of the number of stories the mainstream media have devoted to gays in sports. Outsports was profiled in the New York Times on April 8 and it seemed like foreshadowing.

We had Kobe Bryant saying "faggot"; Sean Avery defending gay marriage; Peter Vidmar losing his Olympics gig for supporting Prop. 8; Rick Welts coming out as a gay NBA exec; a college athlete apologizing for anti-gay tweets and Will Sheridan talking about how he was openly gay with his Villanova teammates while playing basketball.

In addition, Outsports profiled an openly gay Division I soccer player; an out tennis captain and a tennis coach; a gay lacrosse player; a college volleyball coach; two former BYU athletes (one gay man, one lesbian); a college hockey team that was very gay positive; and an openly gay jock who was elected his high school prom king.

The result has been a wide-ranging dialog about gays in sports in print, on radio, TV and the Internet, which only serves to keep the issue front and center. I was underwhelmed when Welts came out, since I had known he was gay for years and felt he could have come out long ago without negative consequences. But his story has served as an angle for the media to bring up larger issues since he is a "first" and those stories are always sought after.

Does this mean we're closer to having a publicly gay athlete in a major sport? Not necessarily. Coming out is a personal decision that depends more on the individual dynamics and situation of the person contemplating it than with the larger culture. However, the idea is becoming less and less novel each day, as the events of the past month have demonstrated. It's much more now a question of when, not if.