No. 27: Professional bowler and rookie of the year Scott Norton comes out at as gay

Share All sharing options for: No. 27: Professional bowler and rookie of the year Scott Norton comes out at as gay 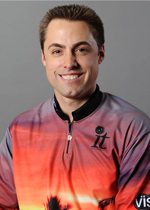 In the gayest month in sports history, we have yet another athlete coming out of the closet. Professional Bowlers Association rookie of the year Scott Norton wrote on the PBA Web site that he's coming out publicly because it's "important to show people that being gay has nothing to do with one's ability to do anything as a man, least of all compete at the highest level of sports."

Norton said many on the tour knew this year that he's gay, and he always received a warm welcome from everyone. Yet another example of someone being gay in sports and it being a positive experience. This keeps the streak going: Over 10 years of running Outsports without hearing a single negative sports coming -out story.

Norton is the 27th person in sports to come out publicly this year, in addition to the hundreds and thousands who have come out to their team or friends or family. At this point, it's a trend. Each story seems to be feeding into the next one. No one is sports is ignoring this issue now.

Hat tip to the Mark Umbach, Towleroad and a bunch of other people.