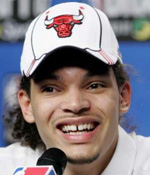 The teaching moment of Kobe Bryant being fined $100,000 for calling a ref a "faggot" lasted a month since it happened again. This time the culprit is Joakim Noah of the Chicago Bulls, who said this to a Miami Heat fan during Sunday's Game 3 on TNT: "F**k you, faggot." Noah had just been called for his second foul.

Here is a video capture from World Star Hiphop:

After the game, Noah apologized:

"I apologize," Noah told reporters. "The fan said something to me that I thought was disrespectful, and I got caught up in the moment, and I responded.

"I said some things that I shouldn't have said. I was frustrated and I didn't mean any disrespect to anybody."

What is telling is that "faggot" is the word Noah chose when he lashed back in anger. The irony is that the NBA debuted an ad campaign during the playoffs against use of the word gay. I guess they'll have cut a new one to cover the use of "faggot" by pro players. Expect Noah to be fined the same 100K as was Bryant. (Update: Noah was fined $50,000).

Here is a Twitter feed of the search terms after the game, won by the Heat: "Noah faggot."