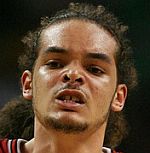 The NBA fined Joakim Noah of the Chicago Bulls $50,000 for saying, "F**k you, faggot" to a Miami Heat fan. It was only half of what the league fined Kobe Bryant for a similar slur hurled at a referee last month.

The league fined Noah “for using a derogatory and offensive term from the bench.” It explained the discrepancy in the two fines this way:

“Kobe's fine included discipline for verbal abuse of a game official,” NBA spokesman Mark Broussard told the AP. The $50,000 fine is 1.6% of his $3.1 million salary this season.

Noah apologized after the game:

“The fan said something that was disrespectful towards me,” Noah said. “And I went back at him. Got it on camera. I don't want to hurt anybody's feelings. Anybody who knows me knows that I'm not like that. I'm an open-minded guy. I said the wrong thing and I'm going to pay the consequences — deal with the consequences — like a man. I don't want to be a distraction to the team right now.”

Two Bulls' players defended Noah, saying the fan was abusive all night and crossed a line. Noah said he he would learn from his mistake, adding, “I'll remember. I'll remember it for a long time.”

The NBA made a mistake in making Noah's fine half that of Bryant's. No one thought that $50,000 of the $100,000 of Bryant's fine was because he berated a ref, so the perception will be that Noah got off lightly. It's ironic that this all happened a week after Phoenix Suns President Rick Welts came out as gay and the NBA aired an anti-bullying ad telling kids not to say "gay" as a slur.

Noah's defense that he lost his cool doesn't wash since there are plenty of neutral slurs one can hurl, yet he chose "faggot," which tells me that to him this is the worst thing you can call someone. It's a word that is still a major part of the jock lexicon. I think the only lesson Noah learned was to avoid saying it next time when the cameras are rolling.