Miami Heat playing with heart, backing up their flashy move

Share All sharing options for: Miami Heat playing with heart, backing up their flashy move 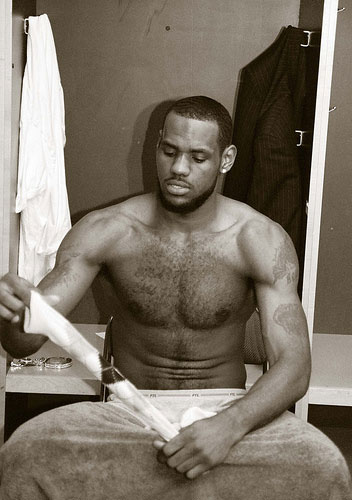 If you saw overtime of the Bulls-Heat game last night, I'm wondering if you saw what I saw: Big trouble for the rest of the NBA. Last summer LeBron James talked about winning five...six...seven titles with the Miami Heat. At one point they hovered around .500 and everyone laughed. But that overtime last night was masterful. Aggressive defense. Dwyane Wade, Chris Bosh and James hitting shots. James diving for the ball. When you add that kind of heart and effort to the talent on that team, you're looking at a dynasty.

Last night they were a shining example for kids and adults everywhere: Part of taking charge of your own future is giving it everything you've got right now. The blocked shot by Wade and then James' fighting for the ball then diving for it demonstrated these guys won't let their big-time contracts get to their heads. They laid down the gauntlet and they're backing it up. It's awesome to see.

Of course, there's still basketball to be played. Dirk Nowitzki poses a match-up problem for Bosh and the Heat. But how will the rest of that Mavericks team stop Wade and James, along with guys like Haslem and Miller? My bet is the boys in South Beach will be partying for as long as the team keeps playing with heart.