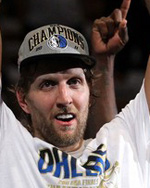 The verdict is in on "The Decision": TKO, Dallas in six. The Dallas Mavericks won their first NBA championship, beating the Miami Heat, 105-95, in Game 6 of the Finals. But outside of Dallas, all most people will focus on is the failure of LeBron James to win a championship the year he bailed from Cleveland to join Dwayne Wade and Chris Bosh in Miami, boasting and bragging of multiple titles.

I don't hate LeBron or the Heat (they aren't the 2007 18-1 Patriots) but James' hourlong infomercial "The Decision" was the most narcissistic and insufferable thing I've seen from an athlete. The over-the-top arrival party in Miami days later where LaBron bragged about winning eight titles was almost as bad. It's always nice to see such arrogance get schooled. Miami might have had the superstars, but Dallas had the team.

James will likely win an NBA title at some point (he's only 26) but he will have to play a hell of a lot better than he did in these Finals. In the fourth quarter of the last three games he disappeared, looking afraid to dictate on offense, making dumb mistakes (six turnovers in Game 6) and generally looking lost. This is not how a King is supposed to act in crunch time. Wade was not a whole lot better. In the fourth quarter of the six games, Wade and James had a combined 62 points. Series MVP Dirk Nowitski had 62 by himself.

The defining moment in hindsight was Game 2, when Wade preened and strutted after sinking a 3-pointer to put the Heat up by 15 with seven minutes left in the four quarter. The Heat went on to blow the game and the series. LeBron might still get his eight titles, but that streak at some point will have to begin with his first and that ain't happening this year.