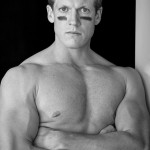 The DC Gay Flag Football League is publishing a 24-month calendar to help raise money for gay and lesbian youth. The calendar will be available starting in August.

The league's release on the calendar, along with some images:

Just last year, the surge of LGBT youth suicides horrified the nation. While the bullying epidemic came as a shock to many, the struggles of growing up gay were all too familiar for many members of the DC Gay Flag Football League (DCGFFL). Inspired by the tragic events, the group consisting of members from Washington’s LGBT community and straight allies have come up with a creative tactic for raising awareness and money to prevent teen suicide. And it will require them to give the shirts off their back. Literally.

The group’s campaign began with an “It Gets Better” video featuring players sharing personal stories of hope. Once on YouTube the views quickly grew into the thousands and triggered an outpouring of responses from across the country—youths and adults—struggling with their orientation. “There are so many gay kids out there that think they’re alone. We’ve been there and if there’s anything we can do to save lives, then we’ll do it.” said JJ Johnson, president of the DCGFFL.

Following the success of the video, the league raised funds for a scholarship given by Team DC to local gay high school athletes. While initial efforts collected close to $4,000, league members decided to step in front of the camera to build upon the program that honors the bravery required when coming out in sports. In May of 2011, DCGFFL Secretary Chris Cormier announced that the league will create a 2 year calendar titled Shirts & Skins. The provocative calendar will feature both gay and straight members of the league. With a launch date of August 9, 2011, the calendar will retail for $20 with approximately half of the proceeds funding LGBT youth based programming.

Shirts & Skins is being developed through corporate sponsorships, player donations and the support of several volunteers. William Waybourn Photography and Tony Frye Design will complete the visual development at no cost to the league.

(click on image for larger view and on that for full-size view. Photos by William Waybourn Photography.)

For more calendar men, go to the league's photo gallery.