College basketball player John Bohannon tweets: 'It is NOT cool to be gay'

Share All sharing options for: College basketball player John Bohannon tweets: 'It is NOT cool to be gay' 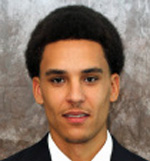 University of Texas-El Paso college basketball player John Bohannon got himself in trouble when he tweeted: "#letsbereal it is NOT cool to be gay! (Zro voice) *jordan shrug*."

Bohannon was apparently reacting to the public service announcement aired during the NBA playoffs where Grant Hill and Jared Dudley of the Phoenix Suns said it was not cool to use anti-gay language. Bohannon then issued the standard non-apology apology. From the El Paso Times:

"Those who were offended by my tweet a few days ago. Didn't mean any disrespect by it as I do not judge anybody by their sexual preference."

"And would hope you would not judge me by one tweet. Thank you."

I will judge him by that one tweet and his lame non-apology: John Bohannon is a moron and has obvious issues with gay people. And being gay is not a "preference," it's an orientation. Perhaps he's simply not too bright: He was suspended one game this season, his first, for what his coach said was a "lack of academic performance."

As for the "Zro" reference in his tweet, William Vega of the Prospector, the student paper at UTEP, had this:

Jeff Darby, associate athletic director for media relations, said that Bohannon told him he was referencing a song by a rap artist named Z-RO. In his song, "These Days," one part of the lyrics reads, "Seems like today, it's cool to be gay."