Share All sharing options for: Baseball announcer Ray Knight apologizes for saying 'sissy' on the air 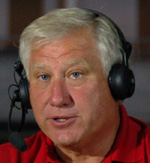 Ray Knight, a color analyst for the Washington Nationals and former Major League Baseball player and manager, apologized for using the word "sissy" during a June 5 telecast, the Washington Blade reported. Knight said this when discussing hitters being hit by pitchers who throw inside:

“So you don’t go up there playing the game like a sissy,” he said. “And I’m at the far end of it, I promise you. But I just don’t like all this baloney about the aggressiveness that’s been taken away.”

Knight told the Blade that he was unaware that sissy was used a word to describe gay people.

“I never thought one time that that would be a word that would be used to connote that,” he said, adding that he meant it as an expression calling for a baseball player to “come on, toughen up." "But absolutely, I get it,” he said. “Now I get it.”

GLSEN also complained about Knight's choice of words, saying that sissy is often used against teens who are bullied.

The Nationals will hold their annual Night Out LGBT event June 21, and the team has also announced it will produce an "It Gets Better" video.

Hat tip to Craig for the story.