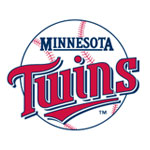 Two lesbians claim they were the victims of discrimination when a security guard for the Minesota Twins told them they couldn't kiss one another at a Twins game. Taylor Campione and Kelsi Culpepper claim the guard said they couldn't play "grab ass" and that they must adhere to the Ten Commandments while in the stadium. If true, it's another great example of religious bigotry and the double standard many Christians live by: Kissing someone of the same sex isn't remotely mentioned in the Ten Commandments, yet playing a baseball game on Sunday would be strictly prohibited (and I'm sure the security guard has no problem with the latter).

The team claims they have reprimanded the guard. According to Fox Sports, Campione and Culpepper are filing charges against the guard with the Minnesota Department of Human Rights.