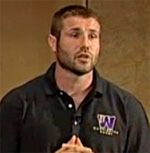 Rugby star Ben Cohen, who has just retired to focus full-time combating homophobia in sports, finished his U.S. tour where he spoke on his new StandUp foundation at several stops. One was at the University of Washington where he was joined on a panel by Dave Kopay, the former NFL player who came out as gay in 1975.

This hourlong video presents the panel with Cohen, Kopay, Shannon Kelly, a representative from the University’s Intercollegiate Athletics Dept. and Jennifer Hoffmann, a professor in the Center for Athletic Leadership. Video: