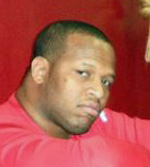 Last year we ran the story of Akil Patterson, the former University of Maryland football player who is now an elite-level Greco-Roman wrestler. Today his hometown paper, the Baltimore Sun, ran a terrific front page story in sports recounting how Patterson substance abuse and anger issues were related to him dealing with his sexuality.

What I liked best about the Sun story (written by Jeff Barker, a close friend of mine for 30 years) is the rather ho-hum reaction Patterson got from the Maryland wrestling program when he publicly came out (Patterson is an assistant coach on the team).

"For us specifically as a staff, it didn't change anything," [head coach Kerry] McCoy said. "It wasn't something where he stood up and gave a speech to the team. It's just like we wouldn't sit down with our guys and say, 'Stand up and explain your relationship status.'"

"He's just a great guy to be around," said Spencer Myers, Maryland's first true freshman All-American, who has been coached by Patterson. "[Patterson's sexual orientation] doesn't change who he is."

Patterson is hard at work training in the hopes of making the 2012 U.S. Olympic team as a Greco-Roman wrestler. McCoy says he has the talent to achieve his goals and now that he is no longer having to hide, Patterson can focus all his energy on his sport.