Share All sharing options for: DeSean Jackson says he's sorry for using anti-gay slurs, but his anti-bullying image is toast 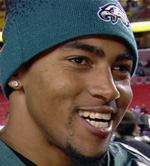 Reacting to criticism for calling a listener to a radio show a "gay-ass faggot," Philadelphia Eagles receiver DeSean Jackson says he's sorry. His statement, via NFL.com:

"In a recent radio interview a caller got really confrontational with me," Jackson said through a spokesman. "I got very heated with the caller, took it a bit too far and did not mean to offend anybody. I meant no disrespect and a better choice of words was needed."

"I am sorry for using words that I know to be hurtful and unacceptable in a recent radio interview." he wrote. "Intolerance is unacceptable and I apologize to anyone I have offended. ... I have made a mistake and would like to make it clear that words I used meant no disrespect to the Gay and Lesbian community."

His tweets are in contrast to the defiant ones he posted in all caps right after using the slur, where he said he was "standing tall" against the people "tryin knocc me off." It's obvious somebody got to Jackson and told him what an idiot he was sounding like.

Back in February, I praised Jackson for standing with a Philadelphia teen who was bullied, but his "faggot" comment undid any good from that. It was an unscripted moment that showed an ugly side of Jackson. The fact that he initially defended himself shows that he did not think he said anything wrong. Like to see him explain that to a gay kid who has been bullied and called the same or worse.

Under normal circumstances, one would expect Jackson to be fined by either the Eagles or the NFL. But the league has locked the players out, and it is unclear whether any action can be taken against a player for something that transpired during the lockout.