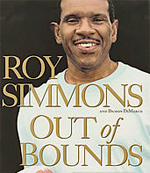 Football, 1992. There have only been three openly gay NFL players and most people can name two, Dave Kopay and Esera Tuaolo. There is a third, former Redskins and Giants offensive lineman Roy Simmons. But his story is less well-known. After coming out on the "Phil Donahue Show" in 1992, Simmons did no media for 11 years.

Simmons has had a rough life -- he is HIV-positive, abused drugs and alcohol and once almost jumped off the Golden Gate Bridge. He also once told Pat Robertson that he has found God.
He wrote a book in 2006 where he told of sex parties, gin and Quaalude binges, copious amounts of cocaine, dressing in drag, and being a prostitute for $15 to $20 a pop.

“I guess I wasn’t really your average stoned-out crackhead,” Simmons writes. “In fairness to myself, most crackheads can’t say they ever played professional football. They can’t say they played in a Super Bowl, can’t say they were ever picked in an NFL draft or did battle with the Pittsburgh Steelers’ defensive line in front of 75,000 screaming fans. They can’t say they’ve been on national television, under bright lights, playing tag with the big men, making huge salaries and working out endorsement deals with international sportswear companies. I had my up time. The average crackhead knows nothing but down. I had my up time and I chose to do nothing with it. I let it slip away like I’d let of everything else in my life. My fiancée. My child. My family. Myself.”

Simmons has always been elusive and I am not sure what he is doing these days. Any updates appreciated.