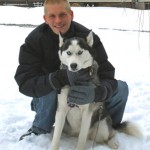 Football, 1998. Greg Congdon is a reluctant gay pioneer. Reluctant because he was outed when he was 17 and still playing high school football. But he has endured and hopes to become a forceful voice in the fight for gay equality in sports.

I caught up with Congdon this spring after he went nine years without doing an interview:

In the annals of athletes coming out, Greg Congdon is Exhibit A of how it can go horribly wrong. In 1998, threats forced him from school and from the two sports he loved playing - wrestling and football - and he was estranged from his friends in Troy, Pa., a small town in rural north-central Pennsylvania.

Dan Woog wrote the definite account of Congdon's outing, but here is the condensed version: Unable to cope with being gay, he attempts suicide and discloses at the hospital that he is gay; it is written on his medical chart. A nurse sees the chart and tells her son, the quarterback of Greg's high school team. The quarterback then tells everyone at school and Congdon's life becomes hell as he is shunned by teammates, classmates and coaches.

After his mother pulls him from school, his story gets picked up by the gay media, which leads to big-time interviews with ESPN, HBO and appearances on talk shows like "Phil Donahue." Congdon is suddenly thrust into the role of gay athlete spokesman, something he is clearly not ready for. After posting a rant on the Outsports Discussion Board in 2004 (in which, among other things, he came out against gay marriage), he disappears from public life and finds solace in alcohol. He resurfaced on the Discussion Board in late February by apologizing for his rant in a post titled "How I fell off the face of the Earth." My interview with him is his first in nine years.

Congdon still lives in his hometown where he once once shunned and he still hears from athletes dealing with their sexuality.

"Some of them want words of encouragement to come out. I always say, be true to yourself, come out when you're ready. Sometimes it's better to take baby steps and make sure you have sure footing than taking a giant leap and falling on your ass. Trust me, I know, I think I was taking giant leaps back then and sometimes I think I still have the bruises on my ass."