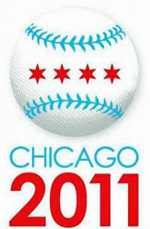 The Chicago White Sox have offered to support the Gay Softball World Series in Chicago, but declined a request to have player Gordon Beckham throw out the ceremonial first pitch. Beckham got in hot water and apologized after writing "Getz is gay” in the infield of a July 4 game with the Kansas City Royals. Getz is Beckham's friend and former teammate. From Ross Forman at the Windy City Times:

Scott Reifert, senior vice president of communications for the White Sox, replied on behalf of the team. He said that Beckham and Reinsdorf will not be able to attend "because a White Sox home game conflicts with your Gay Softball World Series."

Reifert added: "Gordon very quickly realized the inappropriateness of his action and very willingly apologized publicly. I spoke to Gordon about the issue several times, can assure you he learned a very important lesson from the experience and that his apology was heartfelt and sincere."

Reifert also offered several other options, including Beckham taping a video message for the opening ceremony or having a White Sox representative, such as former player Ron Kittle, attend. In addition, Reifert offered to donate signed sports memorabilia and tickets to White Sox games.

The White Sox play 7:10 p.m. games on Aug. 29 and 30 and the invite was for Beckham and Reinsdorf to show up for the 10 a.m. softball first pitch on Aug. 30. I guess they both need their sleep more than making a public gesture of support.

Ted Cappas, president of the Chicago World Series organizing committee "proposed the White Sox match the support the Chicago Cubs have given the World Series, and to donate to Ben Cohen's Stand Up Foundation, which raises awareness and funding for anti-gay bullying. Cohen will attend the opening ceremony at Navy Pier Aug. 28."