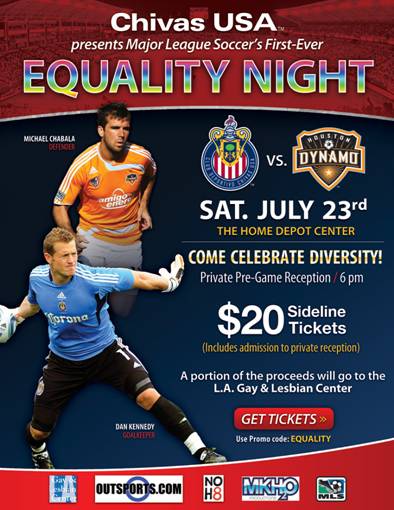 Los Angeles-based Chivas USA is holding Major League Soccer's first-ever 'Equality Night' on Saturday, July 23. It is shaping up to be a really special night. They are hosting the Houston Dynamo that night; Dynamo star Mike Chabala has been an outspoken advocate against homophobia and participated in the NOH8 campaign. The Chivas cheerleaders have created a special routine to Lady Gaga's 'Born This Way' for the event! The Los Angeles Gay Men's Chorus will sing the national anthem that night. In addition, Chivas player Michael Lahoud has spoken out for equality in celebration of the night! There will be a special private reception for Equality Night attendees. The It Gets Better Project will be there, and the NOH8 campaign will be at the pre-game shooting NOH8 photos of attendees (for $20)! Tickets to the game are $20, and aportion of the ticket sales will benefit the Los Angeles Gay & Lesbian Center.

Plus, Chivas star goalie Dan Kennedy has recorded a welcome video for all LGBT fans attending the evening (video after the jump). Outsports is a proud sponsor of the event, along with MKH2O, Major League Soccer, NOH8 and the LA Gay & Lesbian Center.

The team is going out of its way to make this a fantastic evening and to embrace its gay fans. So buy a ticket here and come on out to the event! All Equality Night seats are in the same section right on the sideline (section 130). It is the same night as the Columbus Crew's Pride Cup - it's the gayest night in MLS history! The Colorado Rapids have previously held a gay-themed night (h/t to David Klotz!).