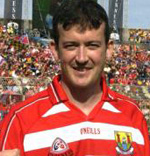 Hurling, 2009: Hurling is an unknown sport in the U.S., but it is huge in Ireland, so the coming out of star player Donal Óg Cusack was a milestone for the country. Cusack is the first elite Irish athlete to come out. He's also that rare athlete who came out while still playing.

In his 2009 autobiography, Cusack, a goalkeeper, talks about how he knew he was different when he was 13 and tried dating to women to confirm what he instinctively knew:

“I tried to go out with women to make sure, to see what kind of feeling it gave me.

“I went out with nice women and good women, but sure, I still knew. I wanted something else. I get more out of men. I just do. Always have. I know I am different but just in this way. Whatever you may feel about me or who I am, I've always been at peace with it."

What is cool about Cusack's story is the support he received from his teammates.

"I'm tough, but there was so much emotion in so many of those conversations, it was wringing me out", he admitted. "Some of the conversations were earnest. Some emotional. Some make me laugh when I look back."