Baltimore Orioles do It Gets Better video

Share All sharing options for: Baltimore Orioles do It Gets Better video 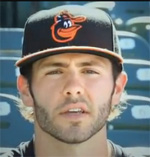 The Baltimore Orioles became the fourth Major League Baseball team to produce a video for the It Gets Better Project to fight teen bullying. The Orioles were proactive in getting the word out, sending us this background on the video:

The Orioles today announced that they have released an 80-second anti-bullying video public service announcement in support of the It Gets Better Project and the Trevor Project. Produced by Orioles Productions, the video features pitchers Jake Arrieta, Jason Berken, Zach Britton, Kevin Gregg and Mike Gonzalez delivering encouraging messages to lesbian, gay, bisexual and transgender youth who are being bullied.

“The Orioles are proud to support the It Gets Better Project and the Trevor Project,” said Director of Communications Greg Bader. “Bullying of any kind, for any reason, is unacceptable to our organization, and we are pleased to have our players speak out against this behavior in the hope it will provide encouragement to LGBT youth, and all children, who are facing hatred and prejudice.”

Bader told Outsports the idea for the video started with Orioles fan Nikki Cimino, 28, of the Baltimore suburbs, who wrote the team an email in early July asking them to step forward and join the chorus of sports teams opposing bullying. Cimino told Outsports that she never imagined the Orioles would actually make a video, so she was surprised when she got a phone call from Bader this week telling her the video would be released today.

Cimino, who is engaged to a heterosexual man, identifies herself as queer and an LGBT ally.

According to Bader, the email from Cimino made its way through the business operations and PR departments. When the team reached out to players to gauge interest they expressed deep interest in large part because standing up against the bullying of gay kids isn't controversial and hasn't been politicized. He told Outsports:

You have a group of people, not even spots-related, who were willing to take on this issue that for whatever reason was somehow taboo. You’re talking about children who were being teased and bullied to the point where they thought life wasn’t worth living. It’s not exactly a controversial issue to speak on. It’s great that the San Francisco Giants were willing to do this, and then it was about riasing awareness to other teams as an opportuntiy to send messages to kids. I’m grateful the Orioles organization and players wanted to step forward.

Bravo for the Orioles for not flinching from saying "LGBT." They join the Giants, Cubs and Red Sox who have already produced videos. Other teams like the Nationals, Mariners, Twins and Phillies have announced they will do videos.

New York and Los Angeles have the highest population of gays and lesbians in the country. Yet neither the Yankees, Mets, Dodgers nor Angels have done an IGB video or announced plans to do one. What is up with that?