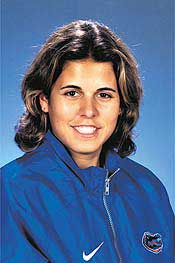 Part of Outsports' series on our 100 most important moments in gay sports history.

Softball, 2004. When Andrea Zimbardi, an SEC honor roll student and a senior captain on the team, was kicked off of the University of Florida softball team in the midst of their march to the NCAA tournament, Zimbardi suspected it was because she is a lesbian. Zimbardi hadn’t been the first lesbian kicked off the team by coach Karen Johns; But she was the first to do something about it.

In 2003 she filed a lawsuit against the school; She was represented by the National Center for Lesbian Rights. A settlement was reached in 2004. As part of the settlement, the University held a two-hour session on homophobia for its coaches and sports administrators. NCLR’s Helen Carroll, who led the session, told Outsports at the time:

“It was groundbreaking because this was the first time a Top 10 [collegiate] institution has gone out of its way to do such training for coaches and administrators.”

Zimbardi said of the settlement that her hope of making Florida a more welcoming place had been reached.

“I am thrilled that we have reached an agreement that will enable us to put this all behind us. My goal from the very beginning has been to help ensure that other gay and lesbian athletes at UF feel welcome, accepted and judged solely on their talent. I love UF and am more proud than ever to be a Gator.”

Coach Johns was fired by the University of Florida in 2005.