Mark Sanchez isn't afraid to talk about his interests in non-football things. 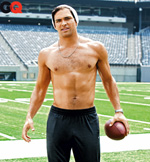 Time to dig out the gay stereotypes. New York Jets quarterback Mark Sanchez hits the trifecta in an interview and photo spread in GQ Magazine that is making the rounds.

Maybe the most striking thing about Sanchez's home is what's on the DVR. Holding a white towel around his waist, heading for the shower, he flips through his saved shows. A documentary about Justin Bieber? Episodes of Glee? The quarterback of the New York Jets is a Gleek and a Belieber?

Yes, he says, failing to notice the tone of incredulity.

The DVR squares with Sanchez's unabashed love of show tunes. ... He's seen just about every show out there, many of them multiple times. His truck is cluttered with cast albums.

If that's not enough, Sanchez was invited to a White House dinner and took a dude as his date, offensive lineman D'Brickashaw Ferguson, "because he knows Ferguson likes politics."