Share All sharing options for: Transgender triathlete Chris Mosier tells about competing in the N.Y. triathlon 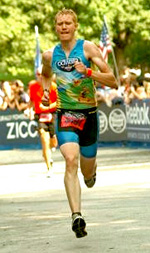 On Aug. 7, I competed in the New York City Triathlon, an Olympic distance race that takes place on my home turf and training grounds. I competed in the race two years ago, but it was special for me this year: this was the first race that I have ever competed in as male. I had previously competed as female.

I felt some pressure leading up to the race following a profile in the New York Times that discussed my transition and being a trans triathlete. While no one told me that they recognized me, in the back of my mind I thought I had a few more eyes on my results than I typically would have because of the press, so I felt as though I had something to prove.

The article portrayed me as an athlete who was not going to analyze statistics and splits, but despite this being my first time racing NYC as male, I still intended on being competitive and doing my best. I’ve found that all this talk about being a middle of the pack dude really isn’t working for me.

The pre-race activities was where I felt the most difference. The transition area (really, how perfect is triathlon for a trans athlete?!) was all men, and the wait for the swim start was a line of men in my age group, nervously chatting about the current and their training leading up to the race. It was the most comfortable I’ve felt at an event to date. Once the race started, however, all thoughts of gender were gone and my focus shifted to the activities in the moment.

The race felt awful. Since securing my sponsorship with TRX, I’ve been focused on preparing for a 540-mile bike race as a qualifier for Race Across America. Needless to say, my cycling has significantly improved, but at the cost of my swimming and running – there are only so many hours in a day. Swimming is my worst of the three disciplines, but this swim was particularly rough. I was one of the many swimmers who grabbed a kayak that morning and held on to catch my breath before continuing on.

I made up any lost time with a bike split that, despite wet roads and a brisk head wind, was good enough for a finish placement of 161 out of 3140 participants in that segment. But an hour-plus in wet shoes with no socks left my feet soft, and I cut my foot running my bike back through transition before the run. The cut turned into a huge blister on the arch of my foot, which resulted in two stops at medical tents during the run to try to combat the stabbing feeling in my foot that occurred with each step. With that, my run was slowed significantly.

The reactions I mostly heard following the race were shock with my improvement. Keep in mind, the first time I did the race, I had only owned a bike for three months, and wouldn’t have finished the swim had the current not been so strong. Since 2009, I had done a half Ironman and Ironman race, and significantly bumped up my training level.

There was a great level of support from my teammates in Empire Tri Club and Team Odwalla following my profile, and a little bit of negative feedback from the tri community from some transphobic folks – which proves to me that there’s a need for my voice out there.

Additional reinforcement of this was found on the run, about a quarter mile from the finish line when the crowds become thick. As I approached two adult women on the sideline, I heard one ask the other, “this one: boy or girl?” Her friend responded, “um… boy.” I am not sure what drives people to call out other people’s genders; feeling comfortable in my new role as outspoken trans activist, I strongly considered stopping to confront the pair, but in my sprint to the finish it didn’t seem worth it.