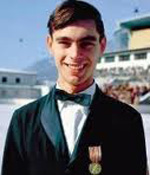 Figure skating, 2000: Ondrej Nepela won the gold medal in men's figure skating at the 1972 Winter Olympics. He skated for Czechoslovakia. But in 2000, seven years after Slovakia and Czech split, the Slovak Nepela was named his country's athlete of the century. He died of AIDS in 1989 at age 38. From Wikipedia:

In his second autobiography, Toller Cranston details a sexual tryst between himself and Nepela at 1973 World Championships. Cranston was distracted and affected by their sexual affair and placed 5th while Nepela won the event and even earned a 6.0 during his free skate.

After his competitive skating career ended, Nepela toured with Holiday on Ice and coached other skaters. Here is his performance at the 1973 worlds, which he won on his home ice of Bratislava: