Share All sharing options for: Preview: Gay Softball World Series in Chicago for first time since 1983

Bob Strada played second base in 1983 for the Chicago Sidetrack softball team that won the championship in the Gay Softball World Series, run by the North American Gay Amateur Athletic Association. That ’83 Series was the last time Chicago hosted the annual, multi-day tournament and the first non-California champion in the event that started in 1977.

Now 59 and living in suburban Willowbrook, Ill., Strada has retired his cleats and hung up his glove, though he is still a regular fan every Sunday when the Chicago Metropolitan Sports Association plays its predominantly male open division softball league, from May through August, on the city’s north side. And he will be there later this month when the Series returns to Chicago.

The Opening Ceremony for the largest annual LGBT sporting event is Monday night, Aug. 29, at Navy Pier, and play begins Aug. 30. The championship games in all divisions – A, B, C, D and the new 50-and-over Master’s – will be played Sept. 3.

Representatives from all championship teams will be honored by the Chicago Cubs at Wrigley Field on Sept. 4, highlighted by a pre-game, on-field recognition ceremony before the Cubs battle the Pittsburgh Pirates.

“I can’t wait for this year’s Series,” Strada said. “I’m hoping that some of the guys who I played with and against will come in for it. I know the Series will be emotional. I just want to be there, for the atmosphere.”

Patrick Keegan returned to the Chicago softball fields this season after a 10-year absence from the local league – and his C-Division team, Spin Wildcats, qualified for the Series, which will be held at multi-field complexes in suburban Schaumburg, St. Charles and Elmhurst. Keegan, who is the owner of All Clean Services, has had second-, third- and fourth-places finishes in the Series.

“I’m very excited for the Series,” he said. “I never thought I would ever come out and play in the Gay Softball World Series. Being the youngest of five boys, it was not easy coming out. I struggled for many years until I came out when I was 28 after a battle with bi-polar disorder. 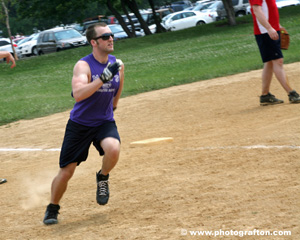 “It was not easy at first, but it got better as the years went on. Now, being an open 46 year-old gay man makes me feel proud to be who I am.”

Keegan’s Wildcats are one of nine teams representing the host city – and among about 150 overall teams participating. More than 4,000 players, family and friends, will attend the six-day softball showcase, which pits players in five divisions. The top-tiered A-Division features nine teams, including the host Spin Menace, and the Orlando Force – the 2010 A-Division co-champions (with the Los Angeles Vipers).

The Dallas TKO captured the B-Division title in 2010 and has moved into A this year. The B-Division features two Chicago-based teams (Downtown Bar & Lounge and the Spin Cougars), along with the Shady Ladies (Austin, Texas), Denver Stix, Sidelines Eagles (Fort Lauderdale), Houston Hellcats and Broadway Crush (Orlando), among others.

“If people think that gay men can’t play sports, I wish they would come out and see the great athletes who will be playing in the World Series,” Keegan said.

Jamie Martin, 38, of Chicago, is a second baseman for the Downtown Bar & Lounge team, playing in his fourth Series (2005, 2007, 2009). He has played in the CMSA league since 2001 and is a clinical psychologist and vice president at Stoelting Company.

“Everyone involved has worked diligently to welcome players from around the country and make 2011 the best Series yet,” Martin said. “I look forward to competitive play, and more importantly, great camaraderie. Each Series has been significantly different. Each experience is unique with unique memories. I had a difficult time in the 2009 Milwaukee Series (as) I was dealing with some personal issues and allowed myself to get overly enveloped in the competitive side of the sport. Fortunately, I had close friends to help me navigate, and it turned out to be a very productive experience for me.”

So what makes the Series so special?

“For sure, the pride everyone feels being part of something special,” Martin said. “It is not always so easy navigating a world that marginalizes minorities. It is nice to have organized gatherings, whether it is pride parades or an athletic series, to join together and show LGBT pride. I grew up in the athletic culture, culminating in Division I college soccer. I know how difficult it is valuing athletics, but feeling significantly different than your teammates. The athletic culture can be traditionally masculinized ascribing to the ‘boy code,’ allowing minimal room for gays. It was novel for me when I joined CMSA and was able to express my athleticism and embrace my identity as a gay male at the same time.” 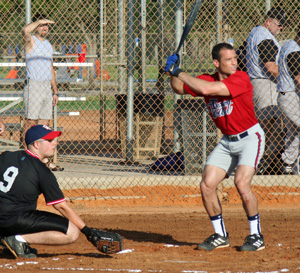 THE EVENT
The Gay Softball World Series will be played at three multi-field complexes in suburban Chicago. All fields have lights and are fenced in. Games start Tuesday morning, August 30. The championship games in all five divisions will be played Saturday, Sept. 3.

TALENT SHOW
The athletes will become entertainers, or try to be, at the annual Talent Show, sponsored by the North American Gay Amateur Athletic Association (NAGAAA), scheduled for Wednesday, Aug. 31, starting at 7 p.m. The event will be held at the Hyatt Regency O’Hare Hotel, with all proceeds going to designated Series 2011 charities: Broadway Youth Center, Illinois Safe School Alliance, and The Families’ & Children’s AIDS Network.

HALL OF FAME DINNER
The annual NAGAAA Hall of Fame dinner will be held Thursday, Sept. 1, at the Center on Halsted, starting at 6:30 p.m.
The 2011 Hall of Fame inductees are: