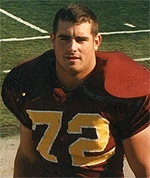 College football, 2009. In 2000, Brian K. Sims was the co-captain of the Bloomsberg University football team that finished the season as the Div. 2 national runners-up. He was also openly gay on the team. While many today still claim it's "impossible" to come out in football, Sims did it nine years ago in a conservative part of one of that year's political ping-pong states.

It wasn't until April 27, 2009, that Sims told his story publicly. Outsporter Larry Felzer connected Sims, a professional colleague, to us at Outsports and we jumped on the opportunity to tell his story for the first time. Despite it being almost a decade old, the response was overwhelming. Few stories in Outsports history have garnered so many comments. Sims' email inbox filled to the brim within 24 hours...and he continues to get emails two years later. It shows the unique power of football in American culture that a 9-year-0ld story could resonate so strongly.

Sims has used his new platform for good. He has spoken about his college-football experiences at dozens of schools. And he has doubled his efforts for equality in Pennsylvania. The legacy of Sims' public coming-out will be felt for years to come.