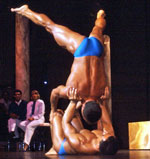 Multisports, 1990: After being held twice in San Francisco, the Gay Games got more international when they were staged Aug. 4-11 in Vancouver. These were the first Gay Games I attended and I was hooked; I have been to every one since.

The Opening and Closing ceremonies were held in BC Place Stadium, which is 2010 was the site of the Winter Olympics ceremonies. About 7,300 athletes competed in 27 sports, including me.

I played center on the L.A. Motion flag football team, but we were in Canada and played Canadian rules. This meant touch football, not flag, and the chance to get a 1-point "rouge" by kicking the ball into or out of the end zone and having it not returned. We had a soccer player as our kicker, but despite his best efforts we never did get a rouge, which was a bummer. The football competition was small (only four teams since no one outside of Canada or the U.S. played) but we had a blast nonetheless. My L.A. team took silver, losing to San Francisco and our team was a hotbed of drama and sexual tension captured in the book "The Huddle" by Dan Boyle, one of my teammates.

The whole Vancouver experience was awesome. The city is beautiful and the people were incredibly friendly and inviting. And with relatively fewer athletes than in future Games, it was also more cozy and intimate and it became a lot easier to meet people from other sports and countries. Vancouver still had the best Gay Games meeting place -- each night, BC Place became an athletes' only (and their friends, partners or hookups) venue with several dance floors, great food and tons of liquor. No other Gay Games venue has come close to replicating it.

Gay Games III was my coming out as a gay athlete and I always have a warm feeling when I remember those seven days in August.