Tip: It's not smart to streak a Little League game while carrying your cellphone

Share All sharing options for: Tip: It's not smart to streak a Little League game while carrying your cellphone 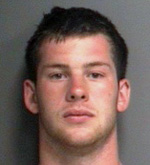 Oliver S. Sullivan, 18, of Hingham, Mass., thought he had pulled off the perfect crime. But he forgot one key detail: Don't bring your cellphone with you when you're streaking. From MyFoxBoston:

On Monday, August 1, 2011 local police received multiple calls reporting a naked man, with a shirt covering his face, running through Lynch Field in Hingham. The field was hosting a Little League game at the time involving a team of 9-year-old children.

Witnesses reported that the man climbed over a fence from the right side of the foul line running towards left center field. He then jumped over a fence into a passenger side of truck waiting. There were 12 children playing on the field as he ran through. This forced the game to stop. In total there were 35-40 children present and 20-25 adults at this game during this incident. The witnesses also said the man dropped his cell phone as he ran.

After his phone was traced, Sullivan was arrested and charged with Open and Gross Lewdness. He told police he did the streak to win a $20 bet. It seemed like a totally harmless prank, but a sex charge won't do wonders for him when he goes out looking for a job. I did like this one comment on the Fox story: "He only got 20 bucks per inch.So no one probably saw anything."

Hat tip to Deadspin, where commenters are busy with plays on baseball movies, such as "Dangles in the Outfield."