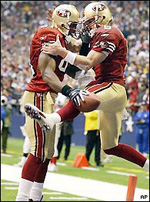 Pro football, 2004: Terrell Owens and Jeff Garcia were once teammates for the San Francisco 49ers. When Owens left for the Philadelphia Eagles in 2004, he did an interview with Playboy and was asked if Garcia was gay. Owens' comments caused a media firestorm:

Garcia had denied that he was gay months before (he would later marry Playboy Playmate Carmella DeCesare and have a child to prove it) and Owens tried to backpedal, though he never did explain how else his "rat" comment could be interpreted.

I wrote this at the time:

Terrell Owens implies that Jeff Garcia is gay. Garcia denies it and mentions that he has had girlfriends. The mainstream media is excited. I yawn.

I confess that the Owens-Garcia lover’s quarrel, as one friend jokingly dubbed it, leaves me underwhelmed. I don’t think Owens’ comments, while classless and ignorant, were all that heinous. And Garcia’s response is annoying.

Yet the dustup between the two former teammates has provided grist for a media mill lacking in much else to write about in the dog days of summer. A Google News search turns up 150 media sources that have run with the story, and ESPN devoted a segment to the issue, spinning it into a larger “homosexuals in the NFL angle.”

It is hard to say whether this is a great gay sports moment given the absurdity of the two participants and the fact that both claim to be straight, but it did get people talking about the issue, which is never a bad thing.