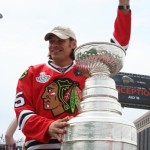 Hockey, 2010: When the Chicago Blackhawks won the Stanley Cup, the Chicago Gay Hockey Assn. asked the team to send a player to ride in the city's pride parade with the Stanley Cup trophy. The team agreed and defenseman Brent Sopel rode on a float with the Cup as crowds cheered.

“I had a great time, way better than I expected,” Sopel said. “It was more (fun) than I expected; it was a blast. Everyone was fun, everyone was dancing. But, at the end of the day, I hope it raised some awareness.

Sopel was there to honor the memory of Brendan Burke, the University of Miami hockey assistant who had come out a year earlier and died in early 2010 in a car crash. Sopel had met Burke a few times and came away with a lasting impression.

“I wasn’t here to advocate (anything), but if coming here helps break down walls in the meantime, so be it. I was here for Brendan,” said Sopel, who rode on the float with his wife. “I hope he is smiling (from heaven).”

The event made national news and was one more example of a barrier broken down in sports.