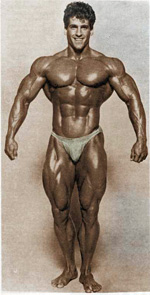 Bodybuilding, 1989: It's hard to imagine there has ever been a more aesthetically pleasing body in bodybuilding than that of Bob Paris, winner of numerous major contests, including Mr. America and Mr. Universe. I know many a gay man who grew up with Paris as their physical ideal. The fact that he was gay made it even cooler.

Bodybuilding is a sport with a robust gay component, yet there have been relatively few elite bodybuilders who have come out. Paris was an exception, as he came out as publicly gay in a 1989 edition of Ironman magazine.

Paris got a fair degree of notoriety with his very public relationship with model Rod Jackson. The two had a commitment ceremony in 1989. Their book "Straight From the Heart: A Love Story" recounted the story of their relationship and the two became LGBT activists; they separated in 1995. Paris, retired from bodybuilding in 1991. He has since acted, written and modeled, and is now married to his partner Brian. The two of them live on an island off of Vancouver, Canada.