UFC freaks out after fighter wears a Speedo

Share All sharing options for: UFC freaks out after fighter wears a Speedo 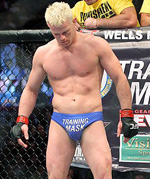 The UFC has banned its fighters from wearing Speedos into the ring after Dennis Hallman wore one in UFC 133 Saturday night. In fact, UFC President Dana White gave a $70,000 bonus to Hallman's opponent Brian Ebersole for knocking him out in the first round and thereby sparing the fainthearted babies who apparently watch the UFC and couldn't bear to see a man in a Speedo.

Hallman said he wore the attire (I can't tell if it's an actual Speedo-brand suit or not but it's become generic usage for that type of cut) after he lost a bet. White is acting like such a wuss about this that he is threatening to fire UFC employees who work backstage and allowed Hallman into the ring.

"I'm seriously pissed off at the guys who work for us who let him walk out with those things on," White said. "I've never been so embarrassed to be in the UFC."

Later, he said he was "horrified" by the moment.

"It was as bad as bad can get," he said, shaking his head.

Hallman said that maybe White "didn't like the blue," and he then couldn't resist getting a bit down into what seems to be some homophobia.

As a few astute TV viewers noticed, Hallman's short shorts inadvertently exposed the family jewels during one ground scramble. Still, he's a little shocked that the whole episode has taken on a life of its own, especially since he said the shorts aren't banned.

"People are sick, disgusting perverts," Hallman said. "They'll break the film down frame-by-frame so they can get a little ball action. That's kind of strange. They have problems."

Can someone please enlightened me as to why this is such a big deal? Many UFC fighters wear what amounts to skin-tight bikini briefs and they participate in a sport where the goal is to beat the crap out of someone. I did find it funny, though, that Hallman tried to get Ebersole in a "rear naked choke." No homo.

I posted this item on Outsports' Facebook page (feel free to join) and there was this great comment:

Nearly naked male bodies mashing around in sweat and blood in a room full of mostly men = good and not gay. Man wearing something akin to a Speedo and spectators can't keep their eyes off his crotch = bad. And of course their eyes looking at his crotch = his fault.