The Bills' new look is sharp

How I saw Week 1 of the NFL, which we all over-analyze for meaning:

Looks matter: Last week, I wrote about a silly but fun study that "proved" the Buffalo Bills were the NFL's best-looking team and the Kansas City Chiefs the least-good looking. The two teams met this week and beauty won out as the Bills rolled, 41-7.

The Bills also simply look good on the field. Their new uniforms have both a classic throwback look and yet are very modern. And I love the buffalo on the helmet.

I see the Bills as a surprise team, though not good enough to get past the Patriots or Jets. I think Ryan Fitzpatrick can be an effective quarterback and he was awesome Sunday, throwing for four touchdowns. The Chiefs were last year's surprise team, but the 41-7 blowout was their worst opening season loss ever. Whatever magic worked in 2010 will be missing this season.

Goat: Tony Romo cost Dallas the game Sunday night as the Cowboys lost a 14-point fourth quarter lead and fell to the New York Jets, 27-24. It was the first time in their history that the Cowboys lost a game they led by 14+ points in the fourth quarter (they had been 240-0-1). Romo fumbled at the Jets' 2 with Dallas up 24-17, then threw one of the worst interceptions you'll ever see with the score tied in the final two minutes. Romo simply tossed it to the Jets' Darrelle Revis, who accepted the gift and set up the Jets for the winning field goal.

On the fumble, Romo stupidly tried to make something from a busted play, when the smart play would have been to throw the ball away, kick a field goal and put Dallas up by 10. But Romo has a history of making dumb plays at critical junctures, so this stayed to form. This was a game the Jets had no right to win, but they hung around and waited for Romo to self-destruct. “We win that football game if I don’t do what I did. We lost this game because of me,” Romo said.

And can anyone explain why Dez Bryant, obviously cramped and gassed, was still on the field? The Dallas receiver moved like a 70-year-old man and hurt Dallas more than he helped.

Ugly 1: The Colts' first game since 1997 without Peyton Manning as their starter was, as expected, gruesome. Kerry Collins fumbled on consecutive plays (Manning fumbled twice all of 2010) and it led to 14 points and a 34-7 Texans' romp.

Collins' effort could be explained by the fact that he only joined the team three weeks ago. But there is no excuse for the Colts' defense that was healthy. They got shredded both on the ground and through the air, and the special teams played their usual garbage game, giving up a punt return touchdown. In addition, the coaching staff did not have the Colts ready to play, so put Jim Caldwell on the hot seat.

Speaking of Manning, Fox reports that he chose a painful procedure to fix his neck, having surgeons cut out a piece of his hip to insert into his vertebrae instead of using cadaver bone. This could mean a much faster recovery for Manning (from six months to six to eight weeks) but could also mean painful hip issues the rest of his life. It seems crazy, but if his rehab goes well, Manning could be back by Thanksgiving, something I didn't imagine a few days ago.

Ugly 2: The Colts had an excuse for looking like crap, but what was up with the Steelers? Guess Ben Roethlisberger should have stayed single. He played like a rookie, throwing three interceptions (including two horrible ducks in the red zone) and fumbling once. The result was a 35-7 Ravens win, the most lopsided since the teams began playing in 1996.

“I guess they were waiting for this one,” Roethlisberger said. “It’s not the way you want to start it for us, obviously (but) I’d rather this be a Week 1 loss than a Week 13, 14, 15 loss.” True, but the last two times the Steelers made the Super Bowl they missed the playoffs the following season.

The coolest play was the Ravens faking an extra point and instead holder Sam Koch took the snap and ran it in for two points. “We got beat into submission,” Steelers linebacker James Farrior said.

Bummer: The Rams lost to the Eagles, 31-13, which was not unexpected. But the Rams sustained some key injuries that will have more impact on the season. Running back Steven Jackson hurt his quad and slot receiver Danny Amendola might be done for the season with a dislocated elbow. Worse was that QB Sam Bradford hurt his right index finger; while it is not broken, there could be nerve damage. If he misses any time, the Rams season will be sunk. Injuries are the wild card in any NFL season and can make a contender a pretender in a snap.

As for the Dream Team, I didn't see a lot of the game, but any time the Eagles can rush for 239 yards is impressive. New line coach Howard Mudd is a genius at assembling a unit and he has to be happy with that performance. I spent time with Mudd a couple of years ago and he was a great guy, so I wish him well even though I will for the Eagles to lose every week (save when they play the Patriots). 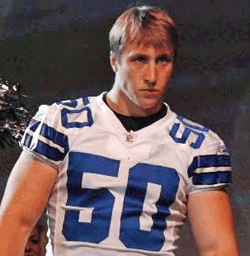 Hot player of the week: "Adorkable" is the word for Cowboys linebacker Sean Lee, a 6-3 second-year linebacker from Penn State (right). He had a great interception against the Jets and the cameras showed a lot of him after on the sidelines. He looks kind of dorky, but with that body his looks make him uber-hot and he has great eyes. He's one to watch.

I've never been on the Jason Witten is hot bandwagon but know others are, so I pass this on from Brent: "The Witten shot during the opening with his hand on his heart, his big blue eyes matching the sky contrasting with his ruddy cheeks. … me-oh-my!"

Surprise 1: I was not among those high on the Falcons (I don't like their defense and picked them third), but I also did not think that much of the Bears, so Chicago's easy 30-12 win was an eye-opener. It's weird – the Bears were the No. 2 seed last year and played in the NFC title game, but almost no one saw them as a playoff team.

Surprise 2: The Browns lost at home by 10, 27-17, to a Bengals team playing with a backup QB. That was a bad start for a team that looked on the rise. Browns' QB Colt McCoy was a pitiful 19 for 40 and even threw a pass to an offensive lineman (which is not allowed). Cleveland also committed 11 penalties.

Fast start: I thought Cam Newton would suck this season, but the overall No. 1 pick looked terrific for the Panthers in their 28-21 loss to the Cardinals. Newton threw two touchdowns, ran for another and threw for 422 yards, amazing numbers for a rookie. He will have growing pains this year, but if Sunday is any indication he is a rare talent and gives hope to a franchise that looked moribund.

Quick hits: Alex Smith was efficient in the 49ers' 33-17 win over Seattle, but Ted Ginn Jr. was the star with a kickoff and punt return for a TD. ... Shocker! The Chargers did not lose their opener to an inferior team, despite spotting the Vikings a 17-7 lead. San Diego won 24-17, but likely lost kicker Nate Kaeding with a torn ACL. ... I didn't see much of the Redskins' 28-14 win over the Giants, but it's never good to lose to a Rex Grossman team by double digits.

Brady commercial: Being aired on Monday Night Football is the new Tom Brady commercial for Ugg's. Somehow I don't see Brady as hip-hop, so the soundtrack doesn't work and I don't get him playing with the dog, but you Brady fans will appreciate the visuals: