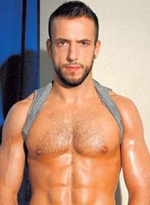 "For several months I have had a boyfriend," De Falco said in a story I ran through a translator. "Previously I had a girlfriend, but I always felt attracted to men. I never hid. Since I was 20 I have been in gay circles, but when I played soccer, nobody noticed anything. If my orientation would have been known, there would have undoubtedly problems. The soccer world is not ready for openly gay players. There are still too many prejudices and too little tolerance. "

Stany is one of those guys who is so incredibly hot, it almost takes your breath away, from his dark smouldering handsome features, to his incredible body, with solid pecs and sculpted chiselled abs, and hairy muscular legs, even his calves are muscular and well built, totally perfect, as are his beautiful feet.

Hat tip to Finneye for the item.