Former NFL player Esera Tuaolo coming out was our #16 Outsports moment, as named in 2011. 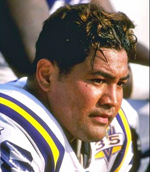 Football, 2002: The coming out of Esera Tuaolo, who played nine seasons in the NFL, shattered stereotypes. Here was a big (6-3, 300 pounds), tough defensive lineman who excelled in the trenches announcing he was gay. His public coming out occurred on HBOs "Real Sports" and generated a national debate about gays in sports. As we reported at the time:

Tuaolo's appearance on "Real Sports" marks a rare event in American sports--an athlete coming out. He is also the subject of a Sunday column by Robert Lipsyte of the New York Times and will be in several upcoming profiles, including on Outsports. He is only the third NFL player to ever publicly say he's gay, joining David Kopay in 1975 and Roy Simmons in 1992.

While Tuaolo's story is unique in its setting--a pro sports locker room--his feelings of depression, loneliness and thoughts of suicide are universal and will resonate with many gay people.

Tuaolo's story sparked loads of stories and columns, raising the perennial question: Can a player be out and gay? Tuaolo was not out while playing, so his story didn't really answer that, but the dialog was revealing. Some players, notably Sterling Sharpe, said it would be impossible for a gay player to exist in a locker room and predicted physical harm. Others basically shrugged and said no big deal. Tuaolo is the last NFL player to have publicly come out.

Tuaolo was an effective advocate for the cause, speaking regularly on campuses and in the media. He has an infectious personality that wins over audiences and his ability to mix religious messages in his talks gave his cadence the sing-song nature of a preacher.

I played with Esera on the Outsports Gay Games flag football team in 2006 and he was a hit with all the players in the event, honored to have a former NFL player in the event. He is also a fun person and people had a blast with him on and off the field.

An accomplished singer (he sang the National Anthem while in uniform), Tuaolo is now a motivational speaker living in Minneapolis.