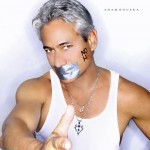 Diving, 1994: "Welcome to the Gay Games, it's great to be out and proud." With those words, gold medal Olympic diver Greg Louganis delivered a message to the Opening Ceremonies of Gay Games IV in New York.

While it might have been Louganis' official public coming out, his being gay was long rumored in the sports world. It did not make his statement at the Gay Games any less powerful. I was among those at the ceremony at Columbia University who cheered wildly when he appeared on the video screen to deliver his message. Louganis attended the Games competition as a diving judge.

Louganis' status as a sports superstar was assured by his winning two gold medals in two consecutive Olympics -- 1984 and 1988. In Seoul he competed despite testing positive for HIV prior to the Games and briefly thinking about backing out. He then hit his head on a nasty dive in the prelims that required five stitches. Yet he came back with a clutch performance to win the gold in the springboard.

Imagine competing knowing you have just tested positive for a disease that at the time was considered a death sentence. And then conking yourself on the head. And still winning two golds. That shows guts, determination and toughness, all qualities that the stereotypes say gay men could not have in athletics. It was a compelling story, yet one hidden from the public because Louganis was not yet out.

The diver went on the write a best-seller "Breaking the Surface" and became a public face of the AIDS epidemic. Through it all, he endured and thrived.

In many ways, Louganis has come full circle, coaching divers in Southern California, as the New York Times reported earlier this year:

As a competitor, Louganis’s mechanics were so sound that China’s national coaches in the 1980s pored over film of his dives and tailored their programs to match his technical precision. Perhaps not surprisingly, the Chinese have dominated diving much as Louganis did. They have excelled at the expense of the United States, which did not win a diving medal at the past two Summer Olympics.

Louganis emphasizes practice over competition and the whole person over the athlete. He encourages his divers to keep daily journals in which they write their intentions for each practice, then critique their performances.

Louganis is healthy despite being HIV-positive, yet is concerned that younger gay men see the disease as something easily treatable:

"I was diagnosed [ HIV-positive ] 23 years ago … a lot has changed since then. It's kind of a mixed blessing. People are living longer in general, but, the message that it sends to the kids is, 'Oh, this can be treated with a pill.' The only problem with that mentality is, I wouldn't wish my drug regimen on anyone and also, not everyone tolerates the drugs the same. The drugs, for instance, metabolize differently in women. Plus, there are not a lot of studies [ about the medicine ] on kids. Plus, they see Magic Johnson out there, relatively healthy," so some don't worry about an HIV diagnosis.

"Prevention is key. Of course it's better to not have to deal with it. Protection. Just play safe."

Louganis is one of the greatest Olympians ever and it's great to see him still contributing and making a difference.