Is poker a sport?

Share All sharing options for: Is poker a sport? 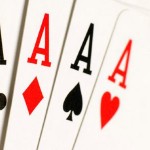 I appeared on SiriusXM's Derek & Romaine show yesterday for about an hour to talk sports. The hosts aren't big sports fans (Romaine hates football), but we always mix it up for the sports fans and non-sports fans in their audience. Somehow yesterday we got to talking about auto racing and I said I personally didn't think auto racing is a sport. "ESPN carries poker and the spelling bee," I said, " so just because ESPN airs something doesn't mean it's a sport." That's just my perspective, though I know other people feel differently.

That immediately drew the ire of a caller who said he is a professional poker player and it absolutely is a sport. He claimed that because it's a competition and takes a lot of practice to become good at it, it's a sport. He went on to demand that I change my personal definition of sport because if it doesn't include poker it's wrong. By his definition a spelling bee, chess and bridge would all be "sports."

So I ask, is poker a "sport"? Are poker players "athletes"? For the life of me, I don't see it. It's a fun game, and it's important to a lot of people, but a sport?

By the way, quick shout out to Michael Myers of Queers 4 Gears who called into the show. This guy knows his auto racing!