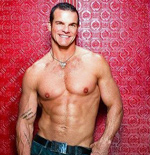 Rugby league, 1995: Ian Roberts was a top-level professional player in Australia's rugby league. And he came out openly as gay to a gay magazine while still playing. He is one of the very few players from a major world team sport to come out publicly while active. Roberts has always been a standup guy who never went along with the BS stereotypes involving gays in sports. He said this to Australian radio in a 2005 interview about finally deciding to come out:

When I came out officially it was probably by that stage one of the worst kept secrets, you know, in rugby league. Anyone who knew me within rugby league, within the fraternity, knew that I was gay. It, it was just something that wasn't spoken about, so when I came out it wasn't like it shocked a great many people. But, it shocked a few in the public, yeah, but, but by that stage I, I must admit, it was so a non-issue for me, and I mean that with all my heart, it was, you know, now, I look back now, my God, nowadays I get reminded that I'm gay.

People mightn't respect the way you live your life but, you know, everyone respects honesty and truth, and if you're a decent person on top of that, you know, in the end, it does, it falls away being gay.

Before he made the decision, Roberts tried to pass as straight, saying he always went out with a girl on his arm. Yet at the same time he had male partners and would frequent gay clubs. I love his description of trying to hide and how pathetic it was:

I tried to conceal the fact that I was gay, at that time, and, and still I had a, male partners, boyfriends, trying to conceal that and, and, and work out the right combination, or the right equation, for the general public or even friends and family. Well I haven't got the right one, or the correct one, because I did it so terribly. I used to go into clubs or bars, I'd, I'd come up with the most fumbling excuses, like it was just for the music. Everyone always seemed to know that I'd been in a gay bar every time I turned up for training, 'Robbo, you up Oxford Street again, eh?', and in a way, I mean, I kind of turned it in my own, into my, you know, my favor, that I was a bit out there, you know, I was a bit cool.

Roberts' coming out was big news in Australia, where rugby league is popular. But he received almost total support, and said the few times he was called "faggot" on the field was just someone trying to get a rise out of him. And any fan taunts bothered him more for how they affected his family:

When the crowd, or opponents would sledge you, or, or whatever, scream things at you, or, I used, I was actually more worried for my parents or my family or my friends in the crowd, not so much me, because they had to endure a lot of that as well and until I was truthful with them, you know, it was, it was hurtful for them as well. It was almost like, you know, 'How dare you, like, from behind the barrier, you know, have the courage to scream, like, absurdities at me?'. I mean, you know, this is a tough thing to say but, you know, predominately gay people want to be treated as equal but fail to treat themselves as equal. I mean that with all my heart and I, and until you learn what that means, as a gay person, things are never going to change for us, you know, things won't change if you don't change.

Roberts retired in 1997 and has gone on to become and actor. But he still gives great interviews and is sought after Down Under whenever gays in sports stories come up. When Aussie Rules Football player Jason Akermanis said some ignorant things about gay teammates and showers last year, Roberts blasted him:

Don’t flatter youself, Aker! That’s all in your own head, man. It was well known in rugby league circles I was gay, long before I came out. Most of my teammates knew I was gay as far back as when I was playing with Souths. The whole locker room thing wasn’t a problem, and nobody behaved any differently to me than any other player. Gareth Thomas [former Wales rugby captain, who came out last year] described how accepting all his teammates were towards him. Not one had a problem with his being gay. And they didn’t start treating him differently once they knew. Every gay sports person should get up and say something if this kind of stupidity is ever raised again. It’s offensive.

I always admired Roberts, 46, for the way he addressed concerns like the shower phobia some straight jocks have. Roberts sees it for what it is -- a distraction and non-issue. And he does a terrific job of tying in coming out in sports with helping gay teens deal with their sexuality:

It breaks down stereotypes like nothing else, particularly for young men. There are gay kids in the suburbs and the country who are killing themselves because they see only a limited depiction of gay people that they don’t fit. If you don’t think this is a serious problem look at the statistics – gay teens are about the most likely to commit suicide.

Roberts did not fit the mold of how people perceive gay athletes. Standing 6-5 and weighing a muscular 240 pounds, he was a star in a tough and demanding sport. Yet he showed courage in coming out and being himself, and for that reason is a person to greatly admire.