Share All sharing options for: High school swimmer writes a beautiful coming out letter to parents 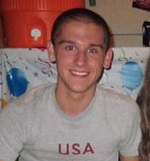 Last week, I wrote about Sam, a Pennsylvania high school junior, who had started a blog to talk about his coming out process. I spoke with him Saturday and he said he planned on coming out to his sister in a few weeks and his parents by Christmas. After much reflection, Sam decided the time was now and told his family on Sunday.

He gave his parents a letter detailing his coming out, figuring it would better convey his feelings than just having a talk. What he wrote is beautiful and I loved his twist on the five stages of grief:

The 5 steps to the process are anger, denial, bargaining, depression, and acceptance. I was angry when I first knew I was gay because I knew not everyone would accept it and understand it. I didn’t even accept it at that point or understand it.

That led to denial, thinking it was just a phase and something I would eventually outgrow, though deep down I knew it wasn’t. Bargaining was me trying to pass as a bisexual in my head, thinking maybe it was just hormones because that’s very common in teenagers. That led to depression which was for me mixed with all the stages. There were bad times, especially when my anxiety disorder became severe. It was my mind’s way of worrying about small and irrational things in an attempt to cover up the larger problem- of being closeted- in my life.

But it’s time for me to come out. I can’t keep living my life as a lie and monitor everything I do or say in case I would accidentally “out” myself. ...

I’m in the acceptance stage of the process. ... I wouldn’t want my life to be any other way, because being me, being gay and in a minority, has allowed me to be compassionate towards so many other people who are misunderstood and made fun of.

Sam, who will be on his school's swim team this winter, then uses two posts (Part 2, Part 3) to detail the reaction, which was generally positive, but not without some strain from his parents, who were shocked by the news.

I feel guilty now for getting mad at their questions. I sort of thought they would know more, and so I got angry at questions that I thought were too “obvious.” It was wrong of me, I should have been more open and clear, but some of this stuff is tough to talk about. I shouldn’t assume that what’s obvious for me isn’t always as clear to them.

Sam also posted on Facebook that he is gay (he announced with this status update: "I'm gay." "You're gay?" "Yeah, I'm gay." "So..you like guys?" No, I like cardboard) and was very nervous heading back to school for the first time as an openly gay person. But there was no reaction, which he took as a good sign, though he is prepared if there is trouble.

Gay people are just as worthy and capable and successful. I know school will get hard once I come out, and I’m aware of that and the choice I’m making. It’s harder to live as a closeted gay guy than it is to be honest and get criticism for it. Some people will be fine with it, others won’t, but I’m not going to let that stop me. I’m going to try a lot of new things from now on because I am not afraid of not being the best. I’ve learned that you don’t have to be the best, or be a leader, to enjoy something and be proud of it and be strong.

Sam's coming out shows the power of reaching out. He started his blog after being inspired by the Brad, Robert, Ben blog by three teen athletes. He then posted a comment on Outsports about his site, which I saw. I then wrote about him, which attracted more readers, many of who gave him great and practical advice. I also connected Sam with an openly gay 15-year-old high school volleyball player (whose story will appear on Outsports) and he was a tremendous help to Sam. All this support gave him the strength to come out.

I encourage you all to read Sam's coming out letter and post a comment on his page to show your support. It's amazing how far he has come in less than two weeks after he started telling his story in public.