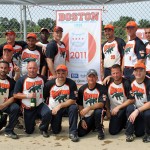 Story and photos by Ross Forman

Shortly after the champagne stopped spraying, the tears started flowing.

Joe Peltier, who plays outfield and catcher and also coaches the Boston Alley Gators in the B-Division, has been playing in the Gay Softball World Series since 1984 – and on Sept. 3, he became a two-time champion when the final out was registered in suburban Chicago at the 35th edition of the international tournament hosted by the North American Gay Amateur Athletic Alliance (NAGAAA).

The Gators defeated the Knoxville Cyclones 9-3 in the championship game, which was Peltier’s first title since an A-Division win in Los Angeles in 1992 while playing for the Boston Fritz. 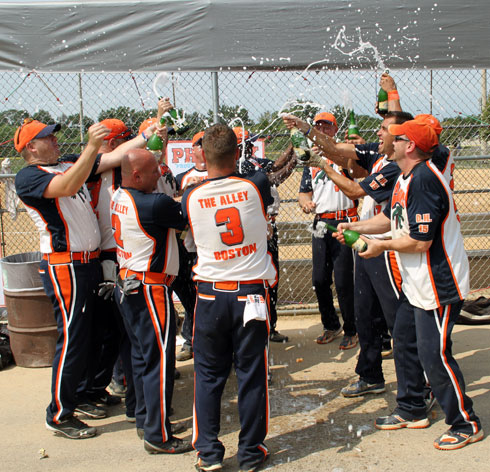 The win was dedicated to former teammate Dave Hildebrandt, who died at a team camping function on Aug. 3, 2008. Peltier and his teammates wore blue rubber wristbands in Hildebrandt’s honor.

“This was fantastic. The guys worked hard all year, and it paid off,” said Peltier, 48, a Boston resident. “This one is very special. It probably was my third most-special (World Series). My first — in Houston in 1984, when we finished third and I was an 18 year-old kid – always will be special. Same, of course, for 1992 in Los Angeles.

Emotions were plenty throughout the six-day extravaganza, which featured an amazing Opening Ceremony at Navy Pier in downtown Chicago, and games played at multi-field, lighted complexes in suburban Schaumburg, St. Charles and Elmhurst.

The tournament featured a record 150 registered teams, though, by the end of the week, two teams (the New York Eagle in the C-Division and the Oklahoma City Swallows in D-Division) had been disqualified due to erroneous player rankings, while another team, the Oklahoma City Spitz in D-Division, was forced out of competition after the team could not field enough players.

“This year’s World Series is right there with all the others; it is definitely one of the best ever. It ran without a hitch. It’s just been a great, great event. The local organizing committee did a fantastic job, down to the last detail,” said NAGAAA Commissioner Roy Melani.

Players endured intense heat and humidity throughout the tournament, but no rain.

There also were teary-eyes throughout, even among World Series veterans, such as Joel Sanchez, 39, of Las Vegas, who has been playing in the event for 15 years – and he finally hoisted the championship trophy and first-place banner in C-Division.

Sanchez led the Las Vegas Rat Pack to a championship game win over the Boston 5 Star Diablos – and was speechless and emotional minutes after hugging his teammates and leaving the team’s first-base dugout.

“The thing that really touches inside is that you get to build a lot of great friendships through softball. Unfortunately, over time, some good friends have gone,” Sanchez said slowly, trying to refrain from crying. “For me, I kind of did it for all of those people who passed away, who were friends of mine,” and never won the World Series.

Sanchez took the Rat Pack into a straight league last year in Las Vegas for additional experience, “and we were made fun,” he said. A year later, “a lot of (the straight players in that straight league) wanted to play with us because we are such great guys and can hold our own.”

One of those straight players was playing shortstop for the Rat Pack in Chicago. “That means a lot to me,” Sanchez said.

“I’ve been calling Vegas home for four years, and it wasn’t always easy. For instance, I used to commute for my first two years here to Los Angeles to play; that was really difficult,” Sanchez said.

“This championship, hopefully, will bring hope to Vegas, which is known to be a transient community. Hopefully this might help settle people into Vegas.”

The Chicago Sidetrack Classics captured the title in the inaugural 50-and-over Master’s Division.

The Atlanta Venom won the top-tiered A-Division crown, beating the San Francisco Hitmen in the final.

Boston Club Café Good Times was celebrating its title after slipping past the Los Angeles Swingers for the D-Division title.

Representatives from the winning teams, along with Brian Redar from the local organizing committee and NAGAAA’s Chris Balton, were honored at Wrigley Field on Sunday before the Chicago Cubs game against the Pittsburgh Pirates.

Adam Goslin, a former college football and baseball player, played on a B-Division team – and he watched the A-Division final alongside his boyfriend, who played in D-Division.

The event featured players representing every color on the LGBT rainbow – from the transgender D-Division pitcher to the glitter-wearing Asian catcher in C-Division to over-the-fence home runs from muscle-packed superstars throughout A-Division. 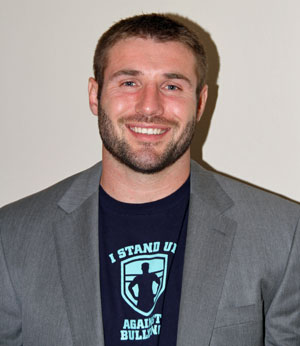 The Opening Ceremony, attended by more than 2,500, featured an appearance by international rugby sensation Ben Cohen (photo right) and the humor of Leslie Jordan.

“Ben Cohen is fantastic to be part of the World Series,” Melani said. “I think his [Stand Up] foundation, [to help eliminate bullying] is part of what NAGAAA stands for.”

Cohen, while in Chicago, practiced with the predominantly gay Chicago Dragons rugby team.

“I really like Chicago,” said Cohen, making his first time in Chicago since 1997. “Being here is about the foundation and spreading the word about what it does. It’s good to be invited, it’s an honor to be invited. We want to eradicate bullying across the board, particularly the LGBT community.”

When asked to appear in conjunction with the World Series, Cohen said his first reaction was, “where and when.”

“Many within the gay community are bullied because they are perceived to be different from other people, which is very wrong,” Cohen said.

Cohen, who is straight and married, said it is “so sad” to hear about LGBT-related suicides, especially among teens.

“Those are a tragic shame,” he said. “Who the foundation looks to affect is, the next generation, those who are now getting bullied. That person could be the person who finds a cure for AIDS [or] cancer, could be the next Prime Minister or President, or could be the next world-famous sportsman.”

We will soon post a larger photo gallery from the 2011 Series.