Stop the gay rumor-mongering against Troy Aikman and others

Share All sharing options for: Stop the gay rumor-mongering against Troy Aikman and others 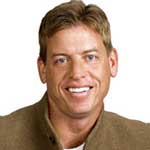 Troy Aikman gay rumors again took center stage last week when the Hall of Fame quarterback was asked by Dallas radio host Dan McDowell about Skip Bayless’ 1996 book that discussed rumors that Aikman is gay. Aikman and the radio hosts spent a whopping 60 seconds discussing the rumors in Bayless’ book, and all of Aikman’s comments were entirely about Skip Bayless.

“When a guy like that comes out and, whether it’s intimated or stated and there’s no substance to that claim, and he’s doing it purely to gain interest in a book, that’s a problem,” Aikman said.

He talked about not seeing Bayless since 1995, wondered aloud if Bayless himself is gay, and said he just didn’t know what he’d say to Bayless if he saw him again. McDowell said Aikman didn’t seem angry, and you can hear in the audio recording (below) his pretty even tone. Aikman’s comments tell us he despises Bayless, not gay people.

Yet many gay commentors immediately took to the Internet to spread nasty, mean-spirited venom at Aikman. While Andy Towle took the high road and reported the straight news, his readers called Aikman a “fag,” “loser,” “self-loathing,” “closet case,” “pathetic,” and saying “everybody in Dallas” knows Aikman is gay.

If Aikman had said something anti-gay, I wouldn’t blame him.

When I was in fourth grade, I had a crush on Jennifer Holden… but a girl named Donnella Carter had a crush on me. One day Donella tried to kiss me and I refused. That afternoon I first heard the word, “gay,” and it was directed right at me. The next morning I came into school and this word popped up all day long. All through middle school and high school, I was labelled gay. I heard it daily. I came to resent it over the years and became increasingly homophobic as I learned what the word meant. As I began to realize in junior high school that I might be exactly what these kids were calling me, the bullying rumors pushed me deep into the closet.

For years figure skater Scott Hamilton was assumed to be gay. He too heard it for years. In an often-labeled “gay” sport like figure skating, it was tough for Hamilton to get away from the rumors. Despite marrying a woman and having children with her (which many gay people will quickly remind you “proves nothing”), it persisted. Not surprisingly, a chip grew on Hamilton’s shoulder, and the Olympic gold medalist has made not-so-gay-friendly comments over the years.

Whether it’s Aikman, Hamilton or myself, nobody likes being bullied with rumors of any sort. Some rumor targets take it out on the bullies, as did the young men who opened fire on Columbine High School in 1999. Some people take it out on themselves, as did Rutgers student Tyler Clementi in 2010. Either way, they take it out on someone.

With all the gay rumors we as a community spread, at some point we need to accept responsibility when they take it out on us. And while Bayless has become the face of this rumor, it like so many others has lived and breathed because the "gay community" wants it to.

Despite the current vogue push against bullying, the “gay community” has for years used the same fear-mongering we see in homophobic bullying. Just look at the nasty attack-of-words It Gets Better creator Dan Savage consistently wages against those who disagree with him. We often use the “gay” label as a weapon, whether it’s against celebrities or even friends. Just this past weekend a friend of mine tried to insult someone at a dinner party by calling him “a big old bottom.” While “bottom” isn’t synonymous with gay, the implication that gay is “less than” is crystal clear.

Enter Troy Aikman. The man was the No. 1 overall pick in the NFL Draft. He was a six-time Pro Bowler, won the Super Bowl three times and was the Super Bowl MVP once. He was inducted into the Pro Football Hall of Fame in 2006 and the College Football Hall of Fame in 2008. Shortly after retirement he was named to Fox Sports’ lead NFL announcing crew, where he has been ever since. He is one of the most decorated and recognizable football players in history.

When he sits down for a radio interview, he’s asked about the 20-year-old rumor that he’s gay. And when he derides the face of that rumor, gay people attack him for it.

We see it with countless other athletes, actors and politicians. Whether it’s Steve Young, Christian Laettner, Tom Cruise, John Travolta, Charlie Crist or Aaron Shock, the collective gay community feels the desperate need to ignite gay rumors and fuel them. Then when the target of these rumors occassionally says something that isn’t all warm and fuzzy, we call him homophobic.

When we talk to athletes about why no active pro athlete in the big four sports has come out, and only a handful of retirees have said they’re gay, this is exactly what we hear about. Athletes want to be known for their athletic accomplishments, not their sexual orientation. There’s no evidence that Aikman is gay, yet just a baseless rumor has left him answering questions about it 10 years after retirement. Thousands if not millions of gay people are convinced he’s gay because it makes them feel better about themselves. And with every question Aikman has to answer about his sexual orientation, it pushes gay athletes mindful of their legacy deeper into the closet.

It’s time for our community to make a choice. Are we going to be that bully in fourth grade who pushes gay people deeper into the closet and makes enemies of potential allies? Or will we spend the time we’d otherwise use spreading gossip to make our world easier for those gay people to be themselves and those allies to be a little warmer and a little fuzzier?

For now, our community is so addicted to gay-based rumor-mongering that the vast majority just can’t help themselves. But if we’re ever going to treat people with the respect with which we ask to be treated, at some point we will all have to collectively grow up and stop contributing to it.